On the joyous occasion of the 109 National Day on the 17 of December, 2016, Loden Foundation was awarded the National Order of Merit (Gold) by His Majesty the King of Bhutan. The event was held in Trongsa this year attributed to its historical and religious significance.

The National Order of Merit (Gold) was granted, “for volunteering time and effort towards promoting humanitarian values, our culture and tradition, and our national objectives; for taking on the responsibility to provide support and assistance wherever the government is unable to reach, and for keeping alive the sacred values of compassion and empathy”, by His Majesty the King of Bhutan. 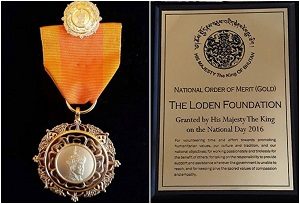 Loden Foundation is a non-profit organization that was founded by Dr. Karma Phuntsho in the year 2000. It is one of the first public benefit organizations registered under the Civil Society Organization Authority in March, 2010. Loden is dedicated to fostering an enlightened and happy society in Bhutan through the promotion of education, learning and entrepreneurship among the Bhutanese youth.

The Loden Family offers our sincere gratitude to His Majesty for the prestigious award. It is an invaluable incentive that gives Loden immense confidence, encouragement and boosts our morale to rededicate to serve the wider sections of the society by empowering youth through education, social entrepreneurship and promote Bhutan’s most important identity of our culture and tradition.

The Loden family would also like to share this special award with the entire CSO fraternity, our generous supporters, well-wishers, friends, Board of Trustees and employees of Loden (past and present) for your sustained support and we hope you would continue to remain on board with us to server the wider sections of the Bhutanese society.