The Loden Foundation is a registered Civil Society Organization (CSO) in Bhutan dedicated to fostering an enlightened and happy society through the promotion of education, social entrepreneurship and Bhutan’s culture and traditions.

Loden Foundation as the name of the organisation has been chosen for its cultural, historical and educational significance. Loden ( བློ་ལྡན ) literally meaning “possessing intelligence” is an appellation of wise and learned people and of the Bodhisattvas. It is also an epithet of both Manjushri, the Buddha of wisdom and Padmasambhava, the supreme saint who established Buddhism in Bhutan.

The Loden Foundation’s motto is ཆོས་བདག་མེད་ཀུན་ལ་ཐོབ་ཐང་ཡོད། (chos bdag med kun la thob thang yod), a Buddhist proverb that knowledge/truth is without an owner and everyone is entitled to it. 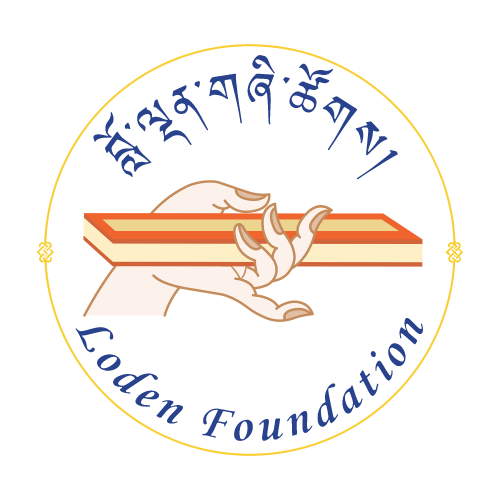 The Loden logo symbolize giving knowledge and wisdom. It is a Himalayan book in the rectangular poti format. The book on open hand symbolizes the gift of knowledge, which, the Buddha said, is the best gift.

The Loden Foundation’s core programme areas are as follows:

Education:
In 1999, Loden’s founder and President, Lopen Karma Phuntsho, facilitated a small donation from the United Kingdom to ensure a child living in rural Bhutan completes her education. Fast Forward to today she is a history teacher, a mother and takes care of her younger siblings. Today, Loden Education Initiatives has supported over 182 children through its child sponsorship programme and 58 youth to undergo undergraduate courses within and outside Bhutan. In addition, 117 children below five years old attended early childhood care and development (ECCD) at five Loden Early Learning centres across Bhutan.

Entrepreneurship:
Since 2008, Loden has been helping young people find meaningful jobs after their education through entrepreneurship education and funding. Loden has trained over 5,000 aspiring entrepreneurs, funded over 200 businesses in 18 Dzongkhags in Bhutan, of which 72 are led by women. Loden also focuses on empowering students in colleges and technical training institutes in Bhutan to explore and learn about entrepreneurship through the Loden SEED (Student Empowerment Through Entrepreneurship Development) programme.

Bhutan’s Culture and Tradition:
Bhutan is going through tremendous change, and its traditional way of life is disappearing fast. Loden has been at the forefront of documenting and studying Bhutan’s cultural heritage. With the dual aim of preserving Bhutan’s cultural knowledge and promoting Bhutan’s cultural heritage across generations and border, Loden’s culture programme currently has three components: written heritage, oral traditions and arts and architecture. Since its inception, the program has recorded 3,260 hours of oral-history, digitized approximately 4 million pages of written heritage and documented over 150,000 artefacts.