The Global Entrepreneurship Week finally concluded on the 17 of November, 2017. The weeklong event on entrepreneurship that was celebrated from 13-17 November. The closing event of the GEW was organized at the Hotel Taj Tashi wherein cabinet ministers, Dasho secretaries, representatives from relevant stakeholders and entrepreneurs took part in the event that was graced by His Excellency the Prime Minister of Bhutan, Lyonchen Dasho Tshering Tobgay.
During the event, Loden declared four categories of awards; i) Best Loden Entrepreneur ii) Best Loden Mentor iii) Bhutan Student Entrepreneur Award. This was to recognize the hardworking, responsible and successful entrepreneurs. Loden hopes that such kind of awards would help to motive and inspire many more entrepreneurs to work hard and make their ventures a successful one. We thank all our supporters, partners and well wishers for their continued support. 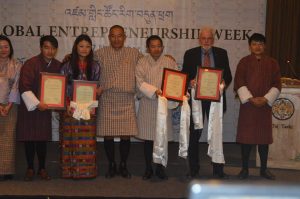