Loden receives the third tranche of the Loden-DHI fund 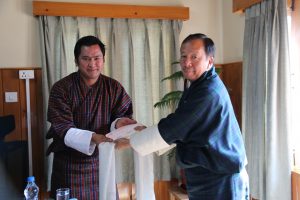 The Loden-DHI fund is a special funding window which was launched in 2015 by Loden foundation and Druk Holdings and Investment (DHI) to help address the issues pertaining to access to finance and to empower the youth through promotion of entrepreneurship in Bhutan. DHI has provided a total fund of Nu. 20 Million over the course of three years to be managed and channeled through Loden Foundation. This year Loden received the last tranche of the fund of Nu. 6 Million Which will be used in providing collateral and interest free loans to aspiring entrepreneurs for the upcoming funding competition in early spring this year.

To commemorate the event, a small gathering was held in the DHI office where the Chairman of DHI, Dasho Sangay Khandu presented the cheque for the last tranche to the Executive Director of Loden Foundation, Mr. Dorji Tashi. Loden hopes to be part of similar collaborations in the future.